Billions of smart objects, mobile devices and applications are being added to mobile networks creating a huge demand for radio connections.

Due to inefficiencies of data transmissions devices often have unnecessary state changes and as a result are connected more often than needed.  When each of these  state changes are multiplied by billions of devices the extra load on the network can create congestion and degrade the network service level.

xtraAir Signaling and Radio Connection Optimization reduces the number of RRC (radio resource control) state changes by up to 15%, enabling up to 35% more users to be served using the same resources utilizing the following techniques:

1. Transport layer control messages are delayed, queued and then transmitted in batches

2. Repetitive control messages are identified and piggybacked to prevent the creation of multiple RRC state changes

3. Control messages are balanced over time to prevent bursts of signaling traffic

As a result radio spectral efficiency is improved enabling operators to delay investment in additional infrastructure to meet the demand for more radio connections.

Base on Android APIs Flashnetworks has developed an application that captures the Radio state of the devices and able to demonstrate a real life scenario of saving radio state changes.

The graphs below show the improvements after optimization:

Red line captures the radio connection state of the device

The following data was captured on a region supporting 20K concurrent subscribers, during the trial period carrier was collecting hourly state change events counters on the MME before and after optimization was turned on. From the data below it shows xtraAir can save up to 15% of state changes on the radio interface 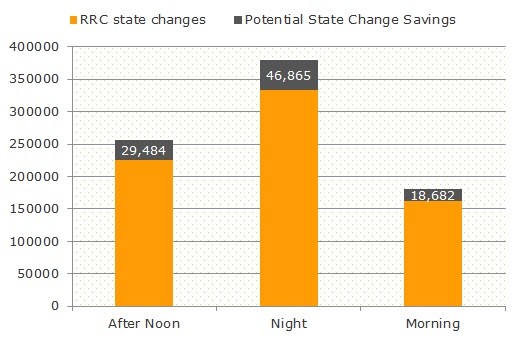